Sometimes life brings the sweetest surprises. One day recently I was taking my morning walk, and I met a young mother pushing a baby stroller with another child, about three years old, sort of straggling along. She seemed distressed and wanted to go back the opposite way. As I approached them, I said hello to the mother, and the little girl took my hand and started telling me about a frog they’d seen that has a broken leg.

The mother said, “No, the frog’s resting there. There will be other frogs.” Brilliant. That comment eased the child’s disturbance. She still had ahold of my hand and asked me to walk with them. I said I was going the other way, and the mother said the child could hug me goodbye. She did and gave me the ultimate present–two rocks from the road. I told her those would be my good luck rocks.

I put those rocks next to my computer to inspire me with difficult deadlines and writing jobs, reminding me that God shows up in quite unexpected ways, if one is open and willing to receive.

Posted by Ellen Bowers on May 18, 2014 in Uncategorized

In recent weeks I’ve had some fun dying pieces of lace and various fabrics, along with some collected hand-tatted bits of frippery. The color is a mixture of tan and rose, making a nice dusky rose that I rather like. It was quite interesting to see how the different fabrics took the color in varying degrees.The left photo shows the fabrics after they have been dyed. Natural fabrics worked the best–cotton and silk. Rayon took the color fairly well. Polyester doesn’t take it at all. Slides off like water.

Then I sewed together the pieces in a collage-type layered way, making this exotic altered couture lacy jacket and a scarf. Part of the fun with this type of sewing (aside from the collecting and dying) is the puzzle of fitting everything together into something new and different.

Sometimes I set it aside for a day or so and let it talk to me, leading me to the next thing to add and where and how to attach it. Very enjoyable process. I may embellish with some beads.

Posted by Ellen Bowers on April 14, 2014 in Uncategorized

No, not food or wailing blues music, both of which I do like a lot. I’ve been reading southern books for several weeks (months?) now. Several years ago I gave myself a graduate course on Tennessee Williams, then black writers. More recently it’s been V.C. Andrews of Flowers in the Attic fame, William Faulkner, Flannery O’Connor, and Sue Monk Kidd. What do people DO who don’t have fabulous public libraries? I can’t imagine.

This process of immersing myself into the gothic, dark nature of the South and its ethic of class structure, proper society, and land inheritance satisfies a curiosity about my own Midwestern roots, certain deep, mysterious values. When I read all these southern stories I “hear” my parents’ neighbors and customers from childhood, the figures of speech, the humor, the making fun of uppity people, and the crude remarks about the opposite sex. Harsh treatment of folks who are a little off in the upstairs. I’m coming to the conclusion that a mellow, mild, Northernized version of the South seeped into the Midwest. It’s still there/here.

I highly recommend Sue Monk Kidd’s latest book, The Invention of Wings, a stark historical story of the Grimke sisters of Charleston who left their father’s slave-labored plantation and became abolitionist lecturers in the North. This was in the 1830s! And also please take a look at this marvelous map from Tufts Magazine that shows the true cultural map of our country. Where are you?

Posted by Ellen Bowers on March 3, 2014 in Uncategorized 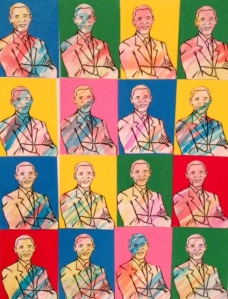 I’m still working with images of presidents that are and have been important to me, this time with an artistic twist, in the style of Andy Warhol. Art or any kind of creative expression has the fantastic capability of helping me wrest meaning from a situation, to claim it somehow. Integrate it, and own it.

What if Martin Luther King,Jr.,would have been President? Interesting to think about.

Politics are not my forte. I have deeply held convictions and values, and an intuitive sense about people, whether they are in the public eye or not. All the intricacies of economics, corporate power, lobbying, and election finance and maneuvering are beyond me. Short of staying at home with the covers pulled over my head to avoid such difficult issues, I do rally forth and vote in every election. That’s what I can do. I’m not a crusader or an organizer, but I can do my small part and try not to complain too much about the results and all the other stuff. It gives me a headache and puts me in a bad mood.

I don’t want to waste my life that way.

Thank you to Rebecca Holland and Downtown Studio, www.thedowntownstudio.com.

Posted by Ellen Bowers on February 18, 2014 in Uncategorized

Martin Luther King, Jr., and the day that honors him make me remember my youth and the shattered innocence of the times when prominent public figures were shot. It seemed like there was hope that the country could be improved with the presence of people like MLK and JFK and boom! They’re gone. That’s pretty hard to take for a young person in her 20s, just forming some kind of world view. 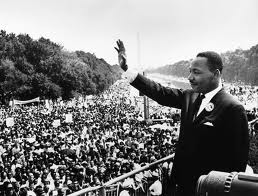 But then, they say if you want “fair” go to Pomona or Sedalia or the Livestock Center in Reno or wherever the hell the people in your area go to show their animals and canned goods. I still have that idealism, but from time to time life knocks me around- the idiocies in our government, creeping mediocrity in literacy, and inefficiencies in bureaucracies that one has to deal with.

Trying not to be bitter, just well-informed, and respectful of the visions of those who could see beyond the average and just getting by. Martin, we loved you. You were a beautiful man, and we’ll never forget your dream.

Posted by Ellen Bowers on January 20, 2014 in Uncategorized

January 17 is the 20 year anniversary of the Northridge earthquake. I remember it clearly. I lived in a triplex in the Los Feliz area of Los Angeles and at 4:31 am the entire building shook like a giant maraca. I was awakened out of a deep sleep, and all I knew to do was to cover my head with my blankets!

During the day I walked over to the Hollywood area and saw a four or five story apartment building that had lost one entire side. Just gone. The structure looked like an oversized dollhouse with all the furnishings still there. Surreal. My neighbor’s house outside my kitchen window was equally surreal. The brick chimney was a pile of bricks in the yard and what was formerly a back deck was split off from the house at an odd angle. Oblique sculpture.

Metaphorically one can experience earthquake-like life events that are equally jolting. In my case, the sudden death of my best friend and my mother’s attempted suicide within the same year created seismic readjustments of large Richter magnitude.

What life events have jolted you to the core? How did you cope?

Posted by Ellen Bowers on January 17, 2014 in Uncategorized

Visits from the Muse

Creative spurts come and go in my life, and I never know what form the next inspiration will take. Ideas come from left field, or some odd material thing comes into my life that nudges an interesting project. In recent weeks the Muse was generous with her visits. I painted a hand made rain stick in the style of aboriginal art. Voila! Note the nifty additions of beads and feathers. 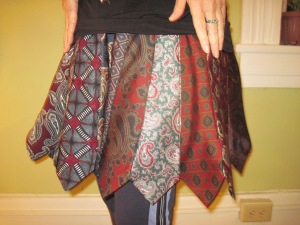 And I made a skirt out of men’s neckties. This was fun, and I must say, taxed my brain a bit in terms of mathematical calculations. Nobody tells you this, but sewing requires quite a bit of math.

What have you and the Muse been doing lately? I’m always curious what others are up to.

Posted by Ellen Bowers on December 30, 2013 in Uncategorized

I have this way of going off on tangents, some of which last for days, weeks, or months.  It could be reading all the books I can find by a particular author or watching all the movies I can find with a particular actor or actress. One summer I read everything I could get my hands on by Tennessee Williams, another it was Steinbeck. It’s as if I’m running my own graduate school for one!

Lately it’s been Frasier reruns.  Yes, I’m watching all 260 some episodes of the 11 year run.  I’m on year 10. Sigh. And I love it! I can’t say exactly what I get out of these deep inquiries–info about somebody else’s creative process, knowledge about what works and what doesn’t, or just random knowledge about a particular place, Seattle in this case, and the early years of the coffee culture..

I liked Frasier when it was on but didn’t watch it religiously.  Now it IS my religion, as least for a few more weeks.  I enjoy the quirkiness of the characters. Niles is my favorite, and when he had the hots for Daphne without her knowing it, it was really fun.  The tango scene is one of my favorites. I also like the character Marty Crane, sort of grumpy and opinionated like my own dad. And the sparring, snooty stuffiness of the two brothers is entertaining and somewhat true to life, I think.  Social climbing. Trying to get elected to the Corkmaster of the Wine Club and being conversant on all the ins and outs of pop psychology.

These people have been in my living room for many weeks now and nobody’s paying me rent. Oh well. Keeps me out of trouble.

Posted by Ellen Bowers on December 3, 2013 in Uncategorized

From My Sketch Book 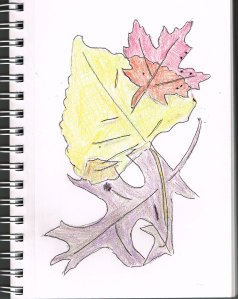 Posted by Ellen Bowers on November 11, 2013 in Uncategorized

Today I’m championing The Heaviest Hunger, a new book by poet, Astrid Charron.  This amazing collection chronicles the author’s journey through numerous struggles with family dysfunction and severe eating disorders.  You will cry and laugh with her as you experience from the inside out crippling obsessions with food, weight, and psychological trauma. 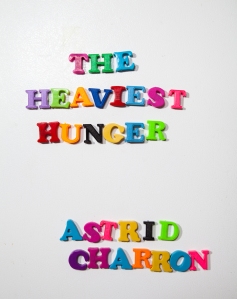 She triumphs, and you can vicariously celebrate the power of the human spirit.

You will find her book on Amazon.com. Also take a look at her website www.astridcharron.com. She’s a highly creative individual–a vintage fashionista as well as a published poet.

Posted by Ellen Bowers on September 16, 2013 in Uncategorized